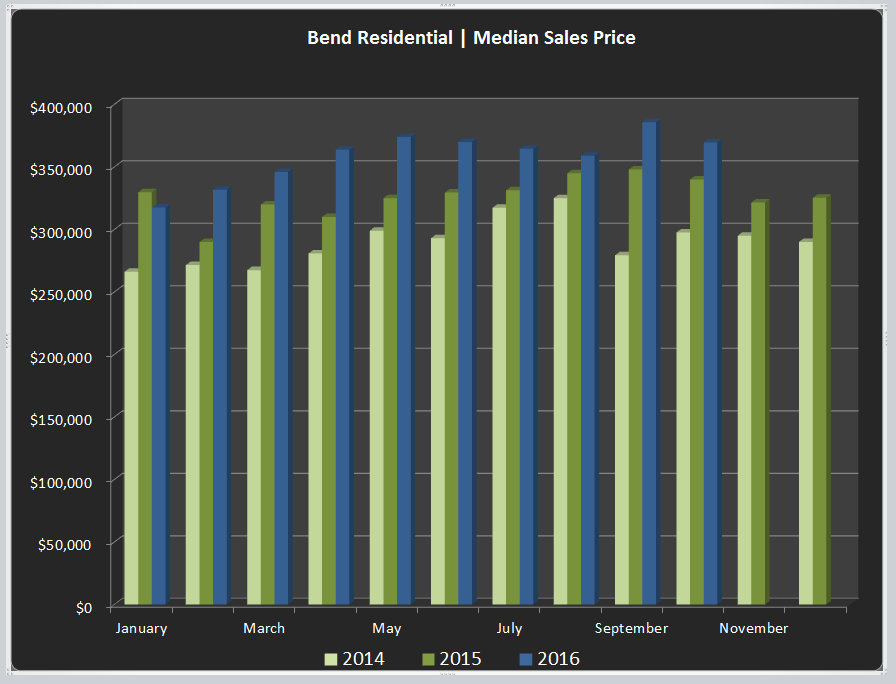 The number of homes sold dropped and the median home-sale price in Bend, Oregon, fell in October, copying a trend from the previous October. The year-to-date median sales price continued to rise last month — as it has done each month in 2016 — adding a very small amount in October to the previous month’s figure.

One hundred ninety-two homes were sold in October, the fewest in any month since 185 were sold in March. A couple of other data points also indicate a slackening in the pace of sales.

The average sales price to list price was 98 percent, slightly off the 99 percent seen in seven of the previous nine months of 2016. The inventory of homes on the market rose from 2.4 months in September to 3.4 in October, which is the highest since a 4.9-month inventory at the end of February.

Inventory estimates how long it would take to sell all of the homes for sale if no new properties went to market. Six months is commonly used as the dividing line between a seller’s market and a buyer’s market, so even with the rise in October, the inventory in Bend skews toward a seller’s market.

The real estate environment in October shared many characteristics with that of October 2015. Compared with the month before, the number of homes sold and the median sales price declined in October 2015, and the inventory rose. Rather than signaling a peak or a bubble in the market, however, the fall and winter market in 2015 was a quiet period before 2016’s almost-unprecedented sales prices.

And even with last year’s September-to-October decline in median sales price and homes sold, October 2015 ranked as the third-most active October in the 10 years for which we have data. In light of that, the changes in the market we saw this October appear as relatively normal, not a sign of a long-term weakening of the market.

Looking ahead to November, there were 258 pending sales at October’s end, very close to the 2016 end-of-month average of 256. November began with 465 active homes for sale; the beginning-of-month average this year is 452.

Whether you’re looking to sell your home or in the market to buy, my experience in the Bend market will help you achieve an optimal result. To learn more about Bend home options, get started with listing your Bend home, or to view area homes, contact me at (541) 383-1426, or visit Bend Property Search to connect with me through my website.