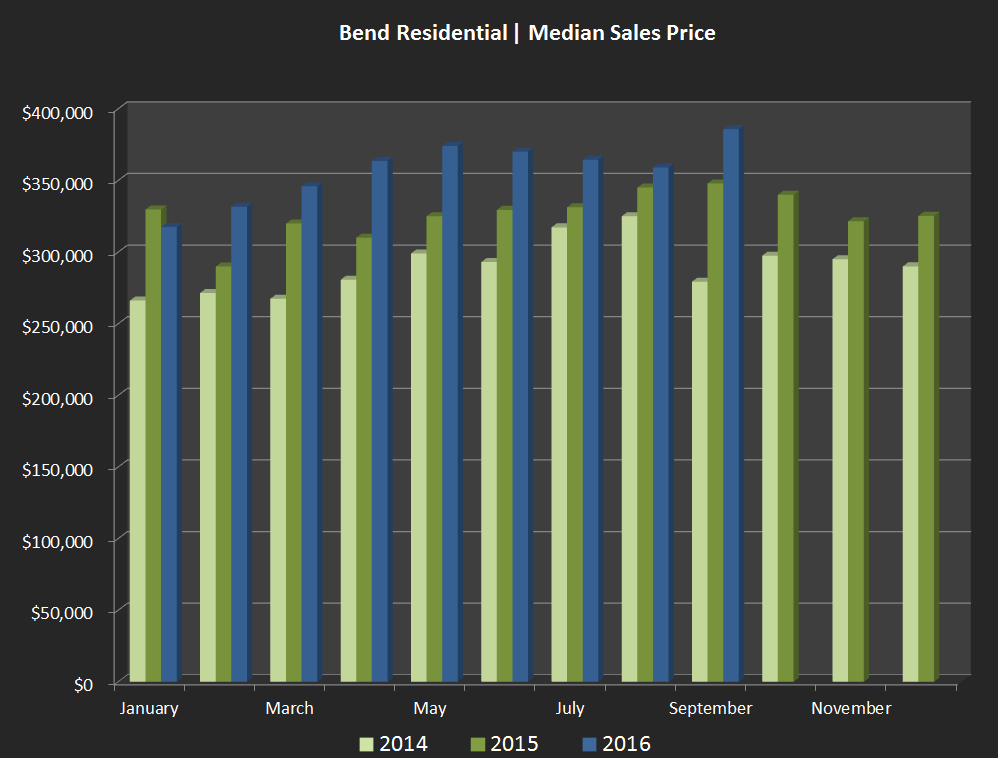 Any sense during the summer months that the housing market in Bend, Oregon, was softening or beginning to tilt in favor of buyers might be erased by the sales figures from September.

After three months of declines in the median sales price, it rose in September to $385,750. That is 7.5 percent more than the median price in August.

The 7.5 percent month-over-month increase is the biggest since there was a 10.4 percent increase from February 2015 to March 2015. The March 2015 rise, however, followed a 12.1 percent decrease the previous month. The month-to-month declines that preceded this September’s growth in the sales price were all of 1.5 percent or less.

September’s median price is the second-highest in the 10 years for which the Skjersaa Group has data. The only month with a higher median price was May 2007, when it was $396,250.

We all know what happened in the months that followed, of course. But in May 2007, the inventory of homes on the market in Bend was more than 15. Last month, it was 2.4.

Considering that six months is generally regarded as the dividing line between a buyer’s and a seller’s market, you can see that Bend’s market is still humming along.

Looking at year-over-year numbers, we can see that it’s not unusual for a rise in the median price in September. It happened last year (0.8 percent) and in 2013 (13.0 percent).

The number of active listings in September was 554, a calendar-year high. In 2013 and 2014, September also had the greatest number of listings.

The average days on the market for a home in September was 104 days. It was the third month in a row with an increase in that data point, but it was the lowest for any September for which we have data. So, houses stayed on the market longer than in July (97 days) and August (101) but for considerably less time than in previous Septembers.

And the average sales price to list price was back at 99 percent last month, after a decline from 99 percent to 98 percent in August.

More than one-fourth of the homes sold in May went for $525,100 or more. That’s the highest percentage of sold homes at that price this calendar year.

There were 208 pending sales in September, the fewest since 170 in January. That might indicate a slower pace of sales to come in October, but in six of the last seven years, more homes were sold in October than in September. The exception was last year.

The right time to buy or sell a house can happen at any time. My experience in the market will help you achieve an optimal result, whether you’re looking to sell your home or in the market to buy. To learn more about Bend home options, get started with listing your Bend home, or to view area homes, contact me at (541) 383-1426, or visit Bend Property Search to connect with me through my website.