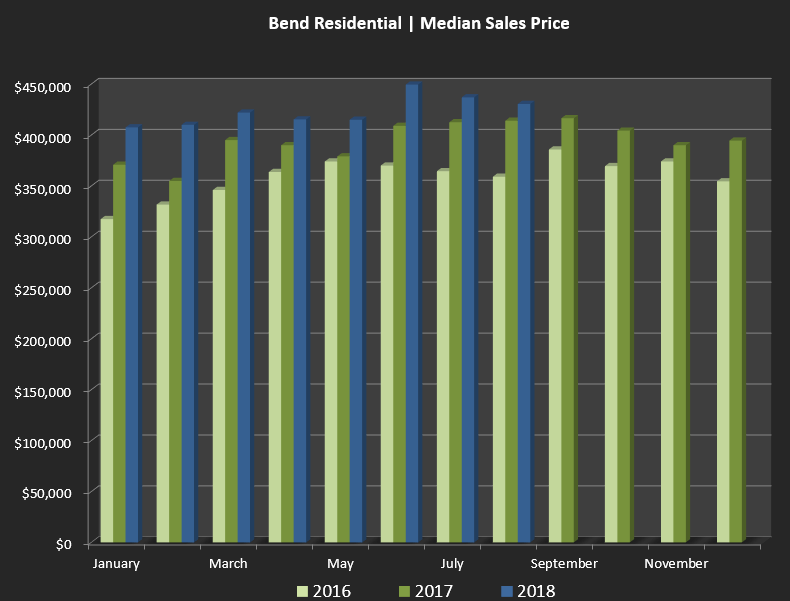 August’s median sales price was the third-highest on record.

The median sales price in August was $430,500, after it registered at $437,000 in July. August’s figure ranks as the third-highest price in the more than 11 years for which the Skjersaa Group has data, and that figure came after the two highest months on record. So, clearly, any talk of a “declining market” has to be considered in context.

This year marked the third August in a row that the median sales price of a home in Bend either decreased or increased less than a half percent from the month before. Four of the last six Augusts, in fact, have been characterized by such modest month-to-month growth.

Looking beyond the median sales price, we see continued signs of a thriving real estate market in Bend, Oregon. There were 260 homes sold in August. In only two other months in our data set were more homes sold (287 in June 2016 and 261 in August 2016).

Although the raw number of home sales might be partly attributable to the increased number of homes in Bend compared with past years, three August data points in particular seem to point to a market characterized by quick sales of appropriately priced homes.

Inventory – a measure of how long it would take for all of the homes on the market to be sold, given the current pace of sales – was 3.3 months. Only once in the previous Augusts has the inventory been lower (2.4 months in 2016) – meaning that in only one August since 2007 has the supply of homes, expressed as a function of sales activity, been tighter. On a month-to-month basis, inventory in August dropped from 3.8 months in July.

And in the price tiers with the most active listings — $325,100 to $425,000 and $425,100 to $525,00 – the inventory was 2.1 and 1.7 months. As a reminder, an inventory of six months is generally regarded as the dividing line between a buyer’s and a seller’s market.
Second, the average days on the market in August was 96 days. That’s the lowest for any August for which we have data. For the previous five Augusts – once the housing market’s recovery had gained traction – the average days on market was 113.

Also, the number of homes with a reduced price as a percentage of homes sold was 86 percent in August, down from the 99 percent from July and down from 91 percent in the previous August.

If this is the time for you to buy a new home – or if you are considering selling your home – I strongly believe I can be of service. My knowledge of the market extends far beyond the numbers and monetary trends. I know the neighborhoods and I know the feel of Bend as a whole – experience that I will bring to bear on your behalf. Please contact me at (541) 383-1426 or visit Bend Property Search to connect with me through my website.