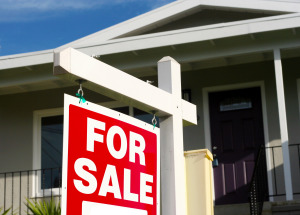 So much for freezing the Bend real estate market this winter. In fact, the local market pretty much started 2016 in the same way it ended 2015: with a record-breaking month.

According to data recently compiled by the Skjersaa Group, 155 homes were sold through January. That might not sound like much, but it is actually a remarkable number for this time of year. Looking at data that goes back to January 2007, the previous high for the first month of the year came in 2015, when 120 homes were sold. Otherwise, only one other January in the last 10 years has topped 100 homes sold.

The January report offers other evidence that the Bend real estate market remains robust. A healthy 170 sales were pending to begin February, which is up from 139 to end December. And 178 new listings were posted in January, up from 135 in December and 164 in January 2015. 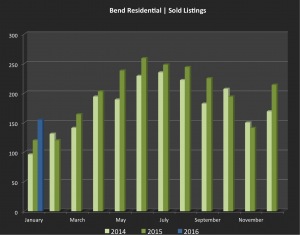 Meanwhile, the months of inventory on the market has remained well below four months.

Some interesting data from the Skjersaa Group’s January report:

This all comes on the heels of summer-like performance of 214 homes sold in December, which was far and away the best year-ending month in at least 10 years. That put a cap on what was a truly remarkable year in the Bend real estate market.

Something else to ponder is what this means for the rest of the year. Like most areas that enjoy all four seasons, the pace of the Bend market tends to follow the weather. That means summer typically brings the hottest sales. For instance, June 2015 saw 259 sales alone, the highest tally in a month in more than a decade.

The January numbers of relatively low inventory and high demand suggests that Bend will remain a seller’s market for the time being. And that will likely lead to continued upward pressure on home values.

If the brisk pace shown the last two months portends to a similarly hot summer, 2016 could very well bring another banner year in Bend.

But let’s not put the cart before the horse just yet.