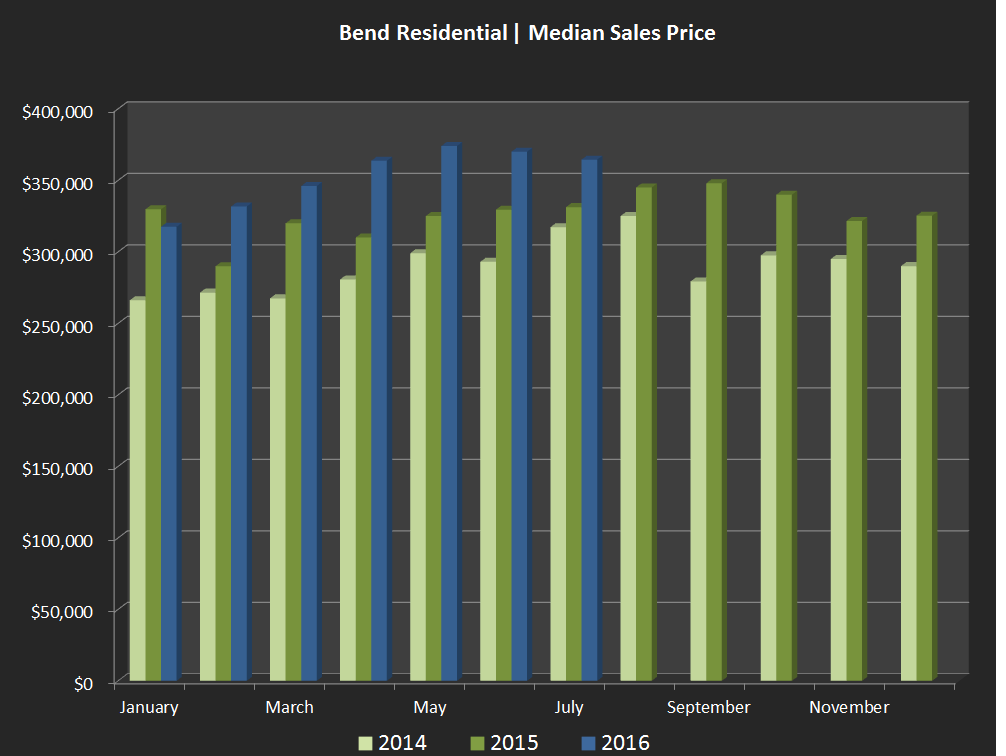 Although the median sales price of a home in Bend, Oregon, dropped in July for the second month in a row, there are plenty of signs that the trajectory of the market has only slightly leveled off and hasn’t begun anything approaching a downward path.

Still, July’s $364,450 ranks as the fifth-highest median sale price in the Skjersaa Group’s data set, which dates to 2007. The only months with a greater median sales price than July’s were two months before the recession (April and May 2007) and May and June of this year.

In spring 2007, the market had an inventory of 12.8 months in April and 15.2 months in May. In July 2016, that inventory was up for the second consecutive month from a calendar-year low of 1.7 in May but still at a historically low 2.2 months.

A market’s inventory represents how long it would take for all homes currently on the market to be sold if the number of houses for sale held steady. An inventory of six months is generally regarded as the boundary between a seller’s market and a buyer’s market.

At the start of August, the Bend market had 534 active listings. That’s the most properties that have been for sale since October 2015, when 565 were listed. In terms of the number of listings, this year’s market is following a pattern begun in 2013, when July and August set calendar-year highs for listings (subsequent months in some past years exceeded August’s figures and pushed the calendar-year highs even higher). 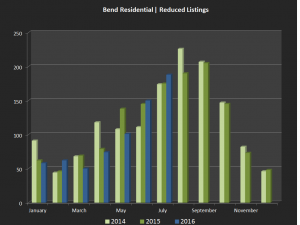 ys on the market fell in July to 97, a low for the nearly 10 years for which we have data. The average sales price to list price remained at 99 percent (where it has been for eight of the last nine months), indicating that properties are coming onto the market at competitive prices.

The number of properties for sale that had a reduction in price hit a calendar-year high in July of 37 percent. Within the price tiers in the Skjersaa Group’s data that had at least five sales in July, homes in the $525,100-to-$625,000 range had the greatest percentage of reduced prices: 47 percent.

With 276 home sales pending at the end of July, we are bound to see another month of robust sales in August. Whether you’re looking to find the perfect Bend home or market your property this summer, I can assist you.

To learn more about Bend home options, get started with listing your Bend home, or to view area homes, contact me at (541) 383-1426, or visit Bend Property Search to connect with me through my website.