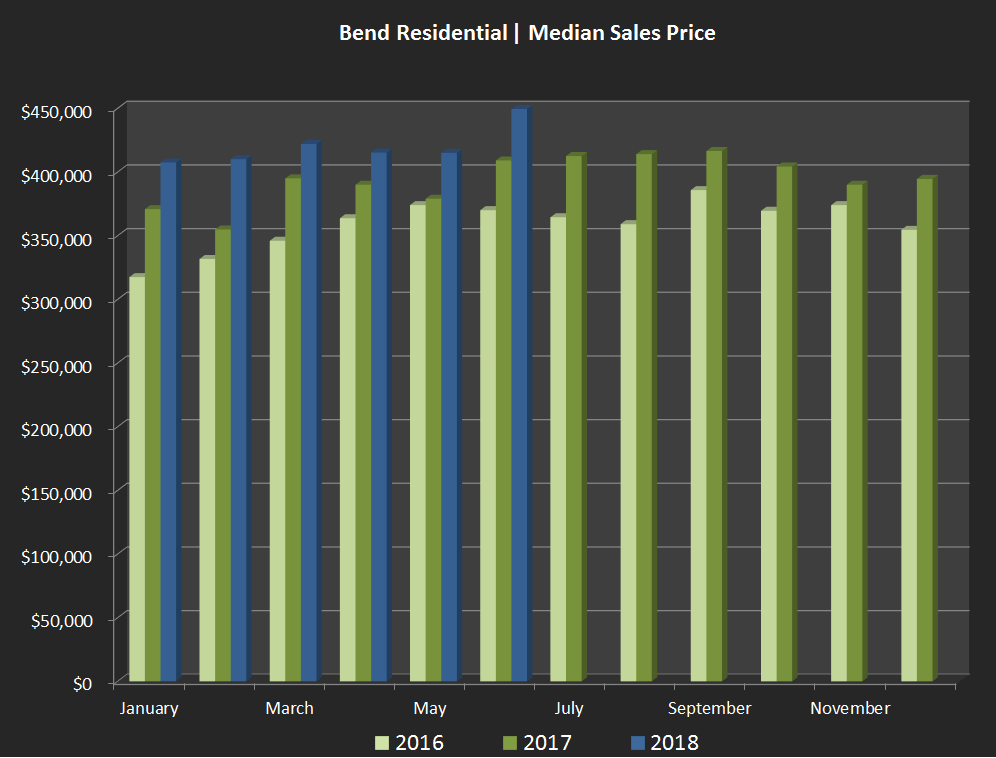 Even as interest rates on mortgages have risen, the demand for homes in the Bend, Oregon, real estate market continues apace. In June, the median sales price of a Bend home was $449,450.

Not only is that a record median sales price for the 11-plus years for which we have data (and probably a record for the history of Bend), but it also is 6.5 percent greater than the previous high-water mark: $421,950, set in March 2018.

June’s median sales price was 8.3 percent higher than the previous month’s. Only one time in the previous three years have we seen so big of a month-to-month increase.

That came in March 2017, when the $395,000 median price was 11.3 percent higher than that from the month before. The weather during the winter of 2017 might have had an effect on the Bend, Oregon, real estate market, and when the snow melted, pent-up demand might have factored into that increase.

Returning to June 2018, 260 homes were sold from among 522 active listings. Both data points are the second-highest for any June in the 11-plus years for which the Skjersaa Group has data.

Diving deeper into properties based on price tiers, the inventory in every price range of $825,000 or less was less than three months. When six months’ inventory is considered the demarcation between a buyer’s and a seller’s market, we can see that for the vast majority of properties, it’s a seller’s market in Bend.

I have witnessed the ups and downs of the Bend, Oregon, real estate market, and that experience makes me confident I can give you a successful outcome when it comes to your home. If you’re in the market to buy or thinking about selling, my knowledge of the market and my ethical approach to the business will come to bear on your behalf. Please contact me at (541) 383-1426 or visit Bend Property Search to connect with me through my website.