Inventory down, median price up in April

An already tight housing market in Bend, Oregon, got tighter in April.

Months of inventory estimates how long it would take to sell all of the homes for sale if no new properties went to market. Six months is commonly used as the dividing line between a seller’s market and a buyer’s market.

April’s 2.1 months of inventory is a decline from 2.3 months in March, which tied June 2013 for the lowest inventory in the Skjersaa Group’s data set. In April of the previous year, the Bend market had an inventory of 3.1 months. 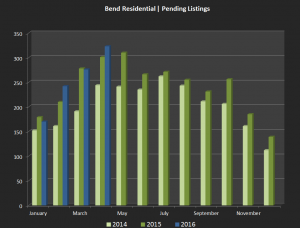 Pending sales headed into May indicate another busy month of home sales in the Bend area.

The dwindling inventory apparently played a hand in the rise of the median price of sold homes. April’s median sales price in the Bend market was $363,650. That’s the third-highest median sales price in the data set, and the highest since May 2007, when the median price was $396,250. The inventory in May 2007, however, was 15.2 months, more than seven times as great as the April 2016 inventory.

As of May 1, 407 homes in the Bend market were for sale, the most for any month this year.

A data point that aligns with the increase in the median sales price is the number of homes sold for more than $425,100. There were 69 such sales last month, the most since 72 in that price range were sold in September 2015. As a percentage of all home sales, 34 percent of April’s sales were in this price range, whereas 32 percent of the sales last September were for $425,100 or more.

The aggregated data from a month of sales and listings, of course, can’t determine the needs of an individual buyer or seller. I can help navigate the market and find the perfect Bend home, or market your home in this environment.

To learn more about Bend home prices, get started with listing your Bend home, or to view area homes, contact me at (541) 383-1426, or visit Bend Property Search to connect with me through my website.